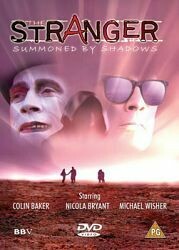 The Stranger: Summoned by Shadows (DVDR)

THIS IS A DVDR NOT SHRINKWRAPPEDWhilst these are not resales there may be some minor scratches and marks. RETURNS ONLY FOR DAMAGED DISCS THAT DON'T PLAY ONLY.

Battered by his experiences travelling through space and time, the mysterious Stranger (Colin Baker) has rejected his long time companion (Nicola Bryant) and is in self-imposed exile on a barren planet, where he determines to ignore the pleas for help from the victims of a macabre and strangely familiar Conjurer (Michael Wisher), who seems to have limitless power. But the Stranger soon finds he cannot ignore their pleas for long — just as he cannot ignore his own past...

In addition to this exciting main feature, this DVD comes complete with special [sic] 'Making of' documentary by Bill Baggs, plus all new interview footage in which Colin Baker talks with Pip and Jane Baker about their unique view of the sixth incarnation of the Doctor, from BBC TV's Doctor Who.

'Summoned by Shadows' the DVD — a must for any fan of the series.