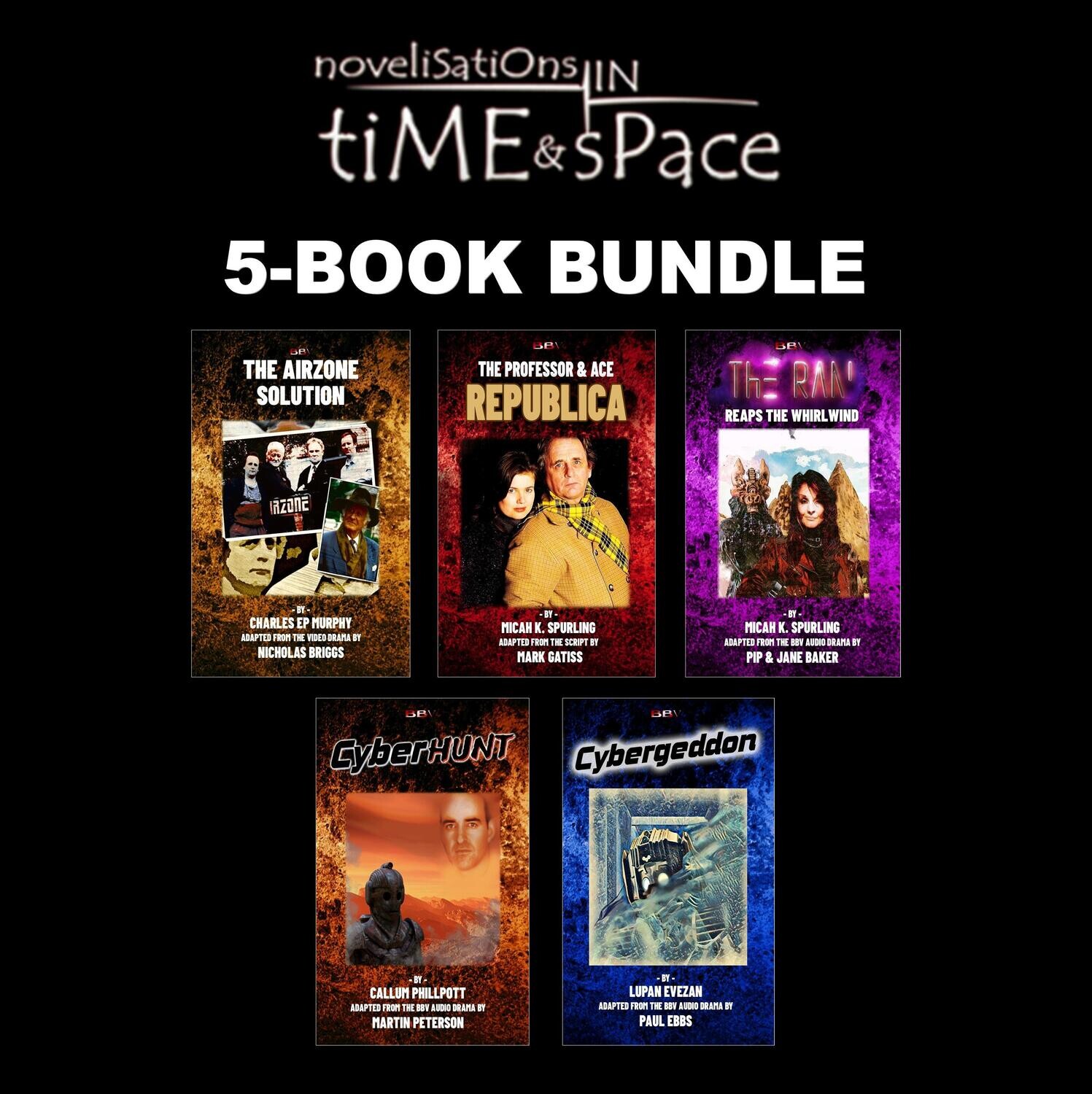 This product is UK Only.

THE RANI REAPS THE WHIRLWIND:

The R ani is a prisoner. Of the Te traps. Those hideous rodent-like vam pires over which she once ruled. No longer. The devious Ura k, her erstwhile disciple, has turned the tables. The Rani is put on trial. And condemned to death. A sentence to be commuted if she exercises her unique scientific prowess to solve a problem threatening to depopulate Tetrapyriabus. Famine. Shortage of food. What food? Blood. Whose blood?The answer is in the cells where a pair of kidnapped humans and a pair of aliens are incarcerated. Destined to become the subjects of a brutal experiment. The Rani forges an unholy alliance with the four "guinea-pigs" in a perilous attempt to escape the nightmare of the planet...Written by Micah K. Spurling, based on the script by Pip & Jane Baker. Edited by Bill Baggs. Cover artwork by Phil Shaw. Series Editor: Bill Baggs.

CYBER-HUNT:
A Cyber War rages throughout the galaxy. The Earth-aligned worlds are fighting for survival against the cold, emotionless might of the Cyber Bloc - an alliance of planets whose inhabitants have undergone cybernetic conversion in the name of racial superiority.
Award-winning journalist Olivia is reporting from the front-line, when all her assumptions about the Cyber War are shattered, not only by a terrifying encounter with the enemy, but by the arrival of a wise and mysterious traveller. The result is a deadly Cyber-Hunt, in which human and machine creature are tested to the limit and the balance of galactic power is at stake.

CYBERGEDDON:
Corrigan is a throwback; a misfit; a starship captain with the heart of a seafaring mariner. His skills as an engineer and navigator are unparalleled. He's just not terribly good at being human. Perhaps that's why he plies his trade between the rim-worlds and the Vega Station with only a Clockwork Robot for company. But when his estranged daughter goes missing on the wreck of a starliner, Corrigan is faced with a stark choice - leave her to die, or attempt a rescue that would surely destroy his relationship with her for ever.

The Cyberons however, care little for Corrigan's choices - with two million new subjects to convert and an unlimited supply of power, they are poised to attack the Vega Station. It will be the first staging post in a decisive war against humanity.
Written by Lupan Evezan, based on the script by Paul Ebbs. Edited by James Hornby. Cover design: Lucy Wood-Ives. Cyberon art by James Lee. Series Editor: Bill Baggs.
Page count: 232

In 1993 BBV produced the only multi-Doctor drama that became affectionately known as the 30th anniversary special. Here it is for the first time in novelised form.
An environmental catastrophe looms. Toxic Air Alerts are ever more frequent and disturbing changes in the climate seem irreversible. The government's latest solution has been to hire the services of the AirZone Corporation. But why is the situation not improving?
Cuddly TV weatherman Arnold Davies does not concern himself with such weighty issues. However, unbeknown to him, an ancient power is about to turn his cosy life upside-down and pitch him into a struggle to preserve the Earth itself.
Bewildered and reluctantly teamed with environmental activist Anthony Stanwick and infamous TV reporter Al Dunbar, Arnie must strive against the odds to expose a terrifying conspiracy while, never too far away, Dunbar's mysterious mentor, Oliver Trethewey, keeps a watchful eye.
Ghastly experiments, hidden agendas and questionable loyalties all come into play before Arnie can discover the truth about the AirZone Solution.
Written by Charles EP Murphy, based on the story by Nicholas Briggs and Bill Baggs. Edited by James Hornby. Cover artwork by Aristide Twain. Series Editor: Bill Baggs.
Page count: 192
Airzone Trailer:

REPUBLICA:
The Professor and Ace arrive in present-day London to find the city strangely changed. England is a republic, ruled by an elderly Lord Protector more interested in a mysterious comet than the long-suppressed forces of revolution fomenting in his kingdom.
As political factions vie for power, the travellers become embroiled in the plans of King Charles XIV who stands poised to reclaim the throne. Can they discover who is behind the drastic alteration of history or will the Puritan cause triumph throughout eternity?
Written by Micah K. Spurling, based on the script by Mark Gatiss. Edited by James Hornby. Cover design: Lucy Wood-Ives. Series Editor: Bill Baggs
Page count: 144