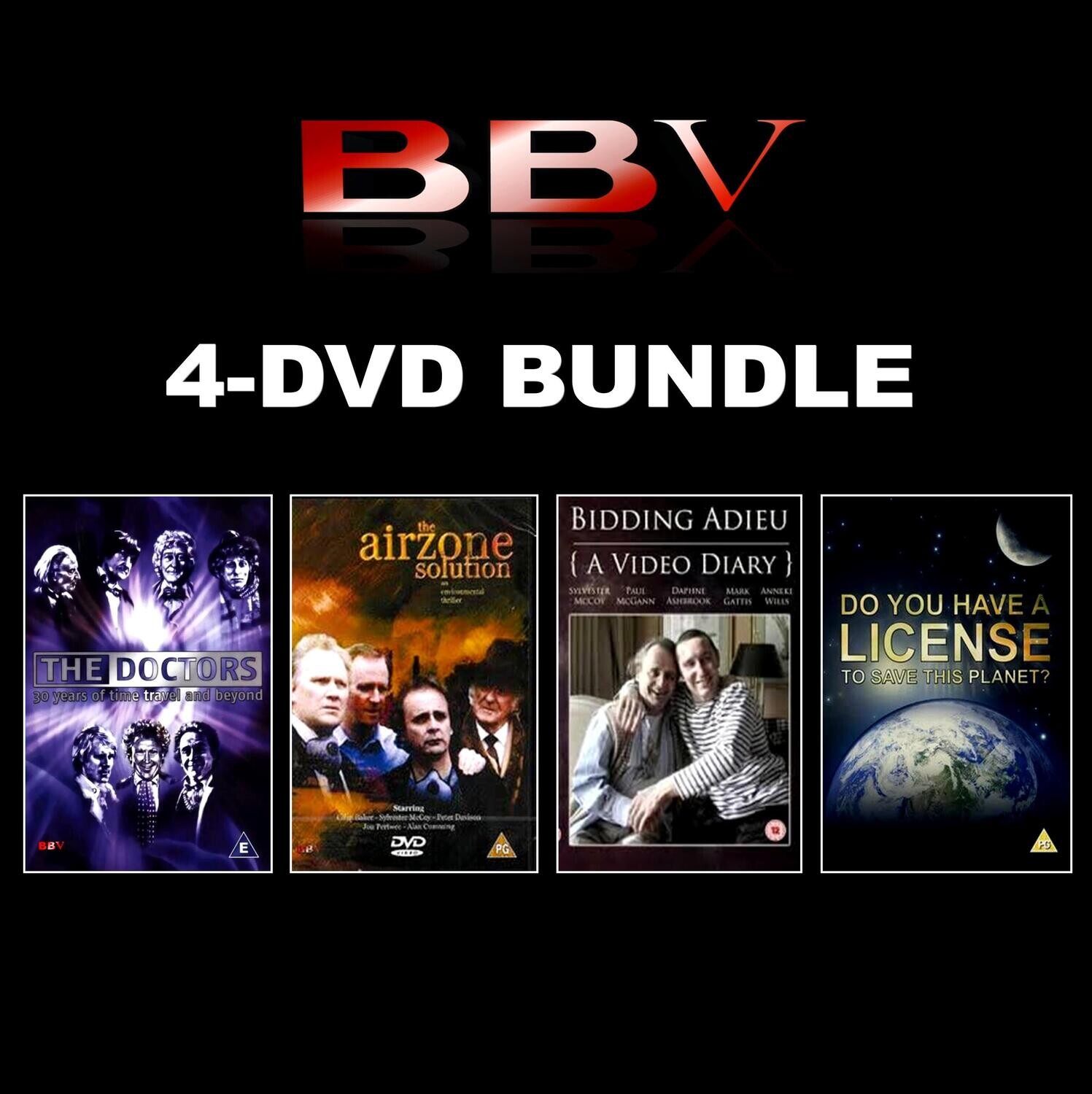 4-DVDR Bundle (The Doctors, The Airzone Solution, Bidding Adieu, Do You Have a License...) SAVE MONEY

All discs are manufactured/duplicated by BBV. Occasionally some may have marks on them but they are not used or second hand.

A special collection-bundle of 4 classic BBV titles, inspired by the universe of DOCTOR WHO.Whilst these are not resales there may be some minor scratches and marks.
Every purchase directly supports BBV & makes future productions possible. This bundle contains:

THE DOCTORS:
Official BBV version with DVD extras. Replicated but not shrinkwrapped.
The Doctors (sometimes known by its subtitle, 30 Years of Time Travel and Beyond) was a 1995 documentary produced by BBV Productions. It was a sixty-five-minute retrospective on the entire history of Doctor Who from 1963 to 1995. Although unofficial, it included interviews with many famous Doctor Who personalities still alive in 1995. It was mostly compiled from previous interviews conducted by Bill Baggs and his associates. It featured home movies of the filming of several Doctor Who serials. It contained the first public showing of some colour footage of the filming of a few missing episodes from the 1960s. It also contained interviews with some people who have not generally appeared on official BBC DVD documentaries or commentaries.

THE AIRZONE SOLUTION:
A REPLICATED DVD NOT SHRINKWRAPPED
An environmental catastrophe looms. Toxic Air Alerts are ever more frequent and disturbing changes in the climate seem irreversible. The government's latest solution has been to hire the services of the AirZone Corporation. But why is the situation not improving?
Cuddly TV weatherman Arnold Davies does not concern himself with such weighty issues. However, unbeknown to him, an ancient power is about to turn his cosy life upside-down and pitch him into a struggle to preserve the Earth itself.
Bewildered and reluctantly teamed with environmental activist Anthony Stanwick and infamous TV reporter Al Dunbar, Arnie must strive against the odds to expose a terrifying conspiracy while, never too far away, Dunbar's mysterious mentor, Oliver Trethewey, keeps a watchful eye.
Ghastly experiments, hidden agendas and questionable loyalties all come into play before Arnie can discover the truth about the AirZone Solution.
SPECIAL FEATURES
Commentary / Out-takes / Deleted Scenes / Interviews
Behind-the-scenes footage / Original "Airzone" trailer
Airzone Trailer:

BIDDING ADIEU
THIS IS A DVDR NOT SHRINKWRAPPED
In January 1996 filming began on a new episode of Dr Who, set in San Francisco but shot in Vancouver Canada.
Sylvester McCoy flew out to join the production team to re-create his role as the seventh Doctor and to hand over to Paul McGann. In this behind-the-scenes video diary Sylvester gives us a personal account of his final days as the famous Timelord.
Reminiscing about the 'old days' and drawing comparisons with the experience of working on his latest adventure, he talks to Paul McGann, Daphne Ashbrook (Dr Grace Holloway) from this production and Anneke Wills (Polly) from the show's past.
All shot on Hi-8 camcorder.

DO YOU HAVE A LICENSE TO SAVE THIS PLANET?
THIS IS A DVDR NOT SHRINKWRAPPED
What do you get if you cross a Krynoid with an Auton, Sontaran and a sombrero wearing Cyberon with a penchant for fine wines and Ex-cell-ent conversation? Shot probably.
On the other hand you could have landed yourself in the middle of the Licensed Reality Corporations attempt to wipe the stain of the Foot Doctor from the bottom of Accepted Canonicity.
Packed full of strange whizzy things, blue swirly things, and more than its fair share of spoons, "Do You Have A License To Save This Planet" brings SYLVESTER McCOY into battle against some of the most fearsome (As seen on BBC TV's DOCTOR WHO) monsters of all time.
Armed only with a duffle coat, an umbrella and a patented Sylvester-o-matic-talk-them-to-death-o-tron, THE FOOT DOCTOR has come to save the universe...